April 17-21, Houston, TX
In 2017, WindSync launched the Onstage Offstage Chamber Music Festival to connect Houston’s people and places through music. By making extraordinary chamber music accessible to both seasoned and underserved audiences in concert halls and in non-traditional spaces around the city, we hope to make our city a more creative and livable space. Small ensembles like ours are perfect for reaching out to communities in this way because we are portable, we don’t require sets, and we provide audiences with the opportunity to experience live music in their own neighborhoods.

This year, Onstage Offstage spotlighted Houston’s Near Northside/Northside Village neighborhood as a special focus of our efforts. Thanks to our ongoing partnership with the Houston Youth Symphony, we spent the week jamming with beginning string students at three elementary schools in Near Northside and performed in community spaces both with and without these young talents.

The festival also included partnerships with the Center for Performing Arts Medicine and Archway Gallery, music at the Medical Center’s Crain Garden, a concert at Midtown Arts and Theater Center Houston, and several casual pop ups around Houston.  Houston string quartet Apollo Chamber Players joined us as guest artists in concert and at the schools. 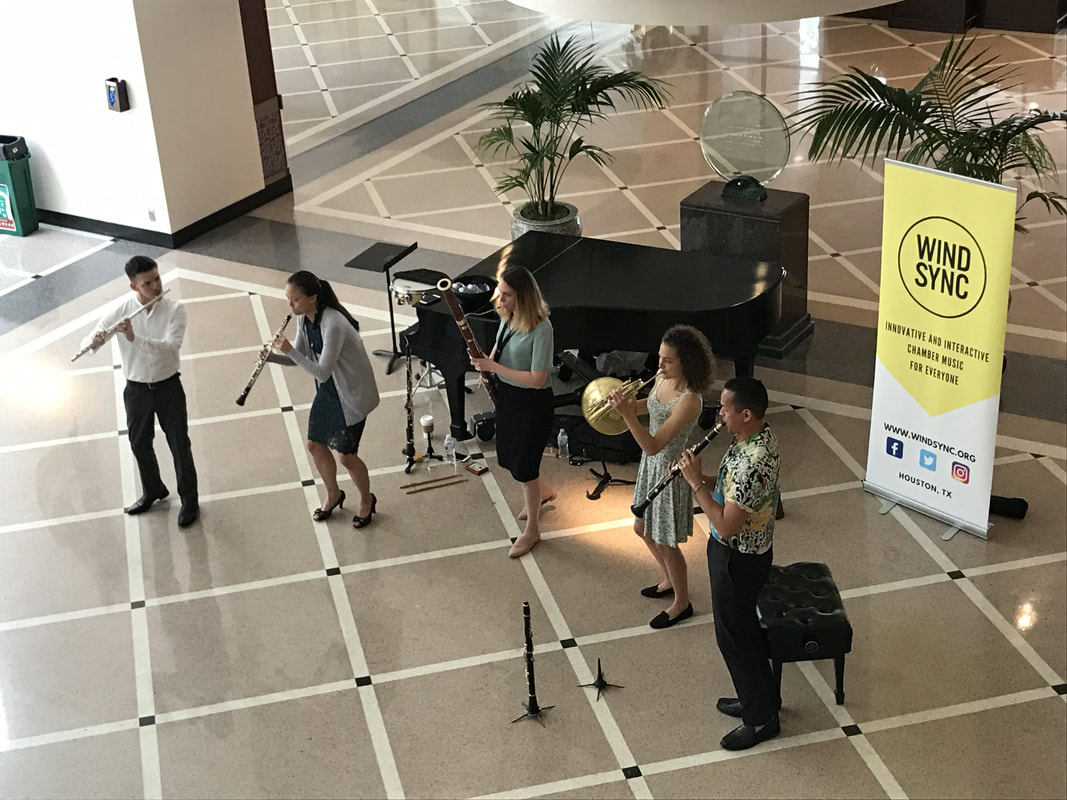 We kicked things off on Tuesday morning as the soundtrack for lunch hour at the Med Center's Crain Garden. Hospital staff, patient families, and visitors from the public all filtered through this lobby area while we shared familiar tunes. We admire Methodist Hospital's Center for Performing Arts Medicine for their cutting-edge commitment to integrative medicine and music therapy, and we always appreciate the invitation. Also fun? All the iPhone paparazzi in scrubs filming us from the second floor. 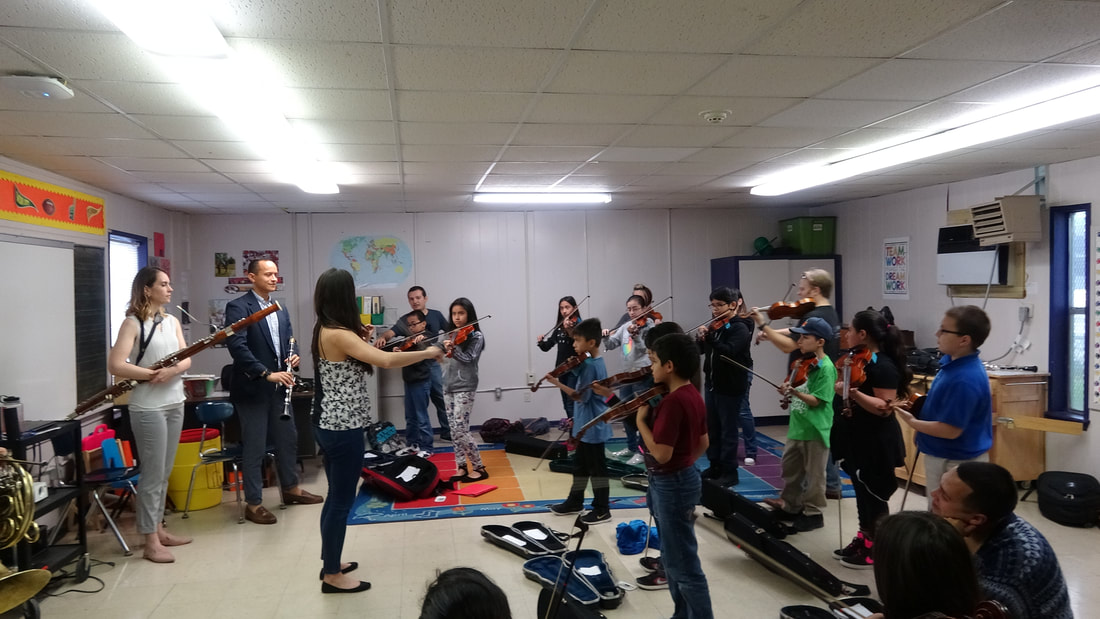 As the school year is coming to an end, the Houston Youth Symphony CODA Music Program planned a culminating concert featuring orchestra students from Looscan, Jefferson, and Sherman Elementary Schools, and the Onstage Offstage artists were thrilled to be guests for this week. Led by director Jackson Guillen and a team of outstanding string instructors, these beginning and intermediate performers of the violin, viola, cello, and bass looked forward to showing off their new skills.

WindSync visited each class over the course of two afternoons to learn two new collaborative pieces--Umoja by Valerie Coleman and El Cascabel by Lorenzo Barcelata. Our very own Emily Tsai ditched the oboe for a violin to direct students through some new techniques (pizzicato fans rejoice!). Then the students taught us a piece of creative improvisation that tested our musical skills through chanting and movement. Their chants were so positive--we are still saying "Be the good in the world"!

On Friday morning, families, community members, and representatives from the City of Houston joined us at the Wesley Community Center for the big collaborative concert. The gym was buzzing with energy and music. Our favorite part was hearing the students perform feature pieces in small groups. Sometimes it's just nice to sit back and enjoy the show...BRAVO CODA! 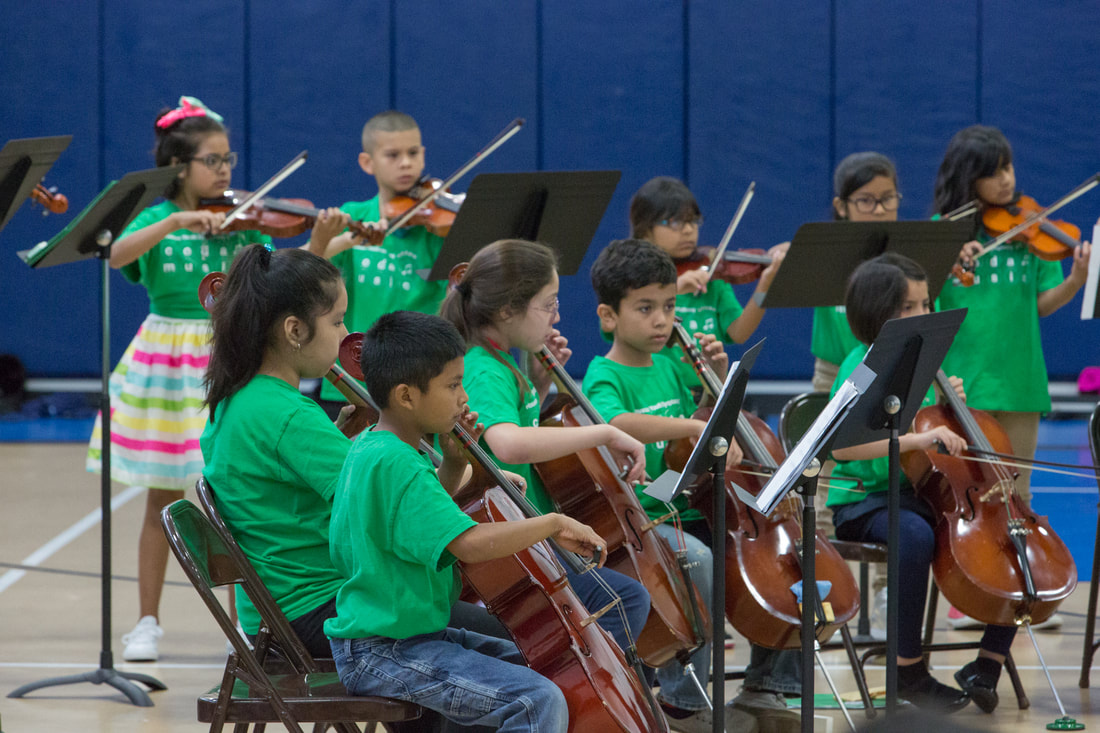 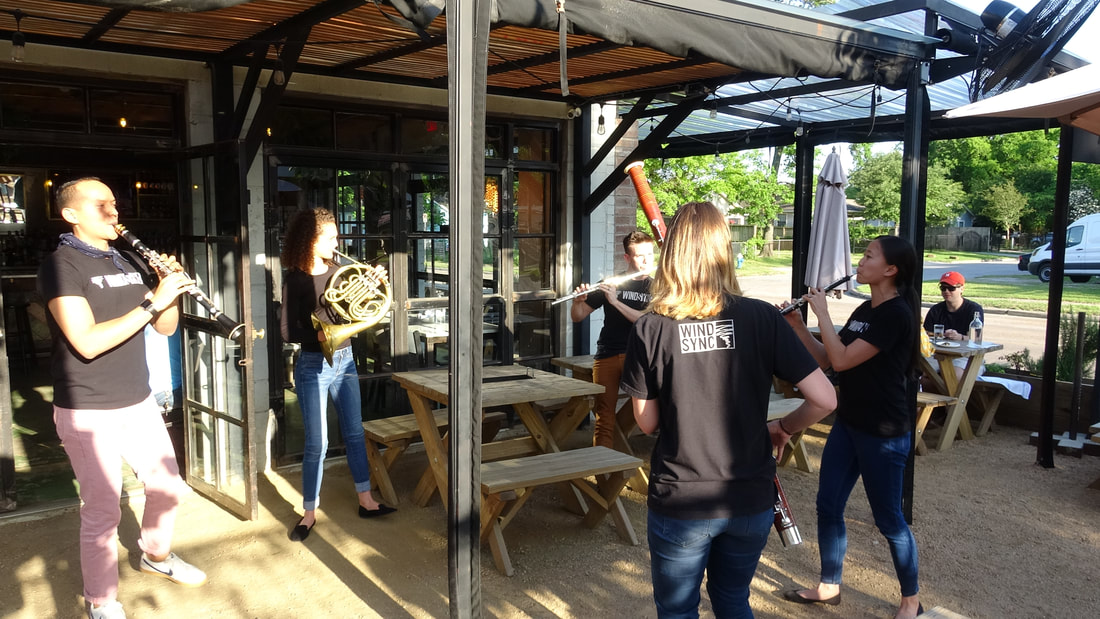 We WindSyncers wanted to spend more time in Near Northside, so we asked friends who live and work there for suggestions of favorite community spaces. We ended up popping up at Edison and Patton, a restaurant that has a large street-facing patio, and we visited the YMCA and the Fiesta store. We were glad to see friends out in their neighborhood and to meet some of the business leaders. Hopefully we can do more with these connections in 2019.

The City of Houston says this about Near Northside:
"Near Northside, located just north of Houston’s downtown, is one of the city’s historic neighborhoods. The super neighborhood is connected to Downtown Houston by Main Street. The neighborhood is generally bounded by I-10 to the south, I-45 to the west, and Hardy Street to the east, while extending a number of blocks north of I-610.
Near Northside saw its first development in the late 1800s with the growth of the city’s railroad industry and the influx of European immigrants. The Hardy Rail Yards, which lies on the southern edge, drew residential and commercial development to the area just north of White Oak Bayou and Downtown Houston. The Near Northside is still home to a variety of small, locally owned businesses, many Victorian style homes, and a variety of social service and healthcare agencies.
The Near Northside is serviced by METRORail’s Red Line, extending along its two major commercial arteries: North Main and Fulton streets. Home to a largely Hispanic population, the Near Northside features its culture through the neighborhood’s annual Sabor del Northside festival. Moody Park is an important gathering place in the community, along with Northside High School (formally Jefferson Davis High School). The southern part of the neighborhood includes Marshall Middle School and Carnegie Library." 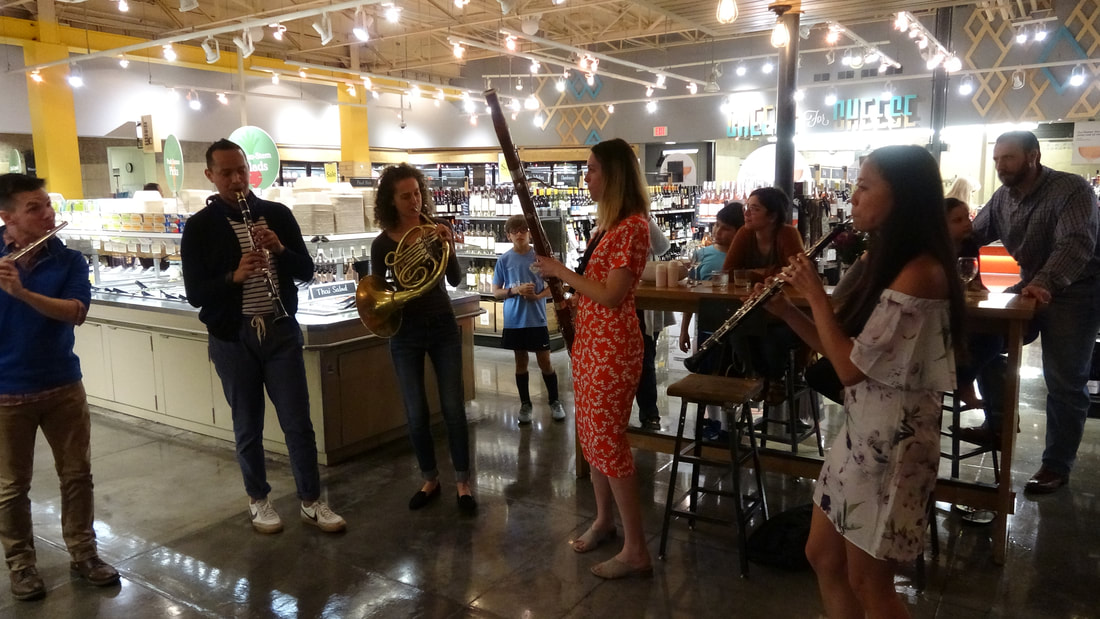 Eager to pop up a bit more and drum up support for our Saturday night main stage concert, we spent Friday evening at a happy hour hosted by Whole Foods Bellaire. Sure enough, we ran into some longtime WindSync fans out grocery shopping in addition to neighbors who were surprised to see a performance happening by the prepared foods section. By the end of the night, we had drawn several families from the neighborhood to hang out with us and socialize with each other--nice to see such a range of ages at this one! 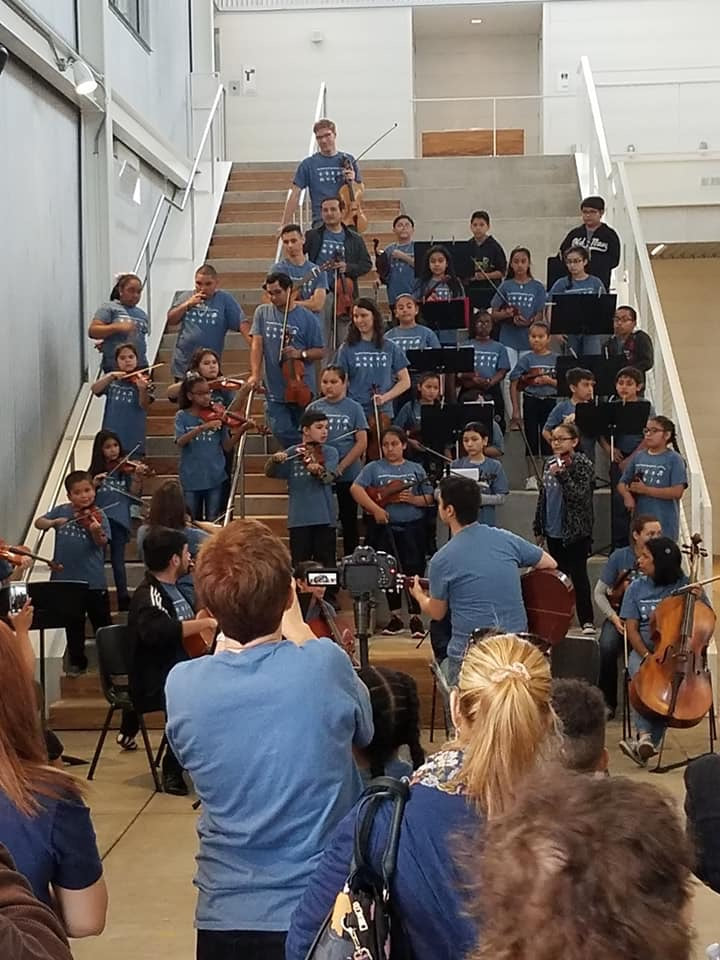 To tie it all together, we held our main stage concert on Saturday night at the Midtown Arts and Theater Center Houston. The Houston Youth Symphony helped the CODA students field trip downtown, and they performed on the steps of the breezeway before the start of our concert. They and their families received free tickets to see our concert, too.

We were grateful to share this concert with Apollo Chamber Players and with Andres Rodriguez from HSPVA Mariachi. Much of the music that WindSync and Apollo programmed took inspiration from folk music, and it made us reflect on homes of all kinds. Our collaborative piece, Anthem of Hope by Anthony DiLorenzo, had been commissioned by our friends at the River Oaks Chamber Orchestra in commemoration of Houston's resilience after Harvey. After seeing our young collaborators from CODA at work, though, it is clear that we have bounced back stronger and more hopeful than ever. 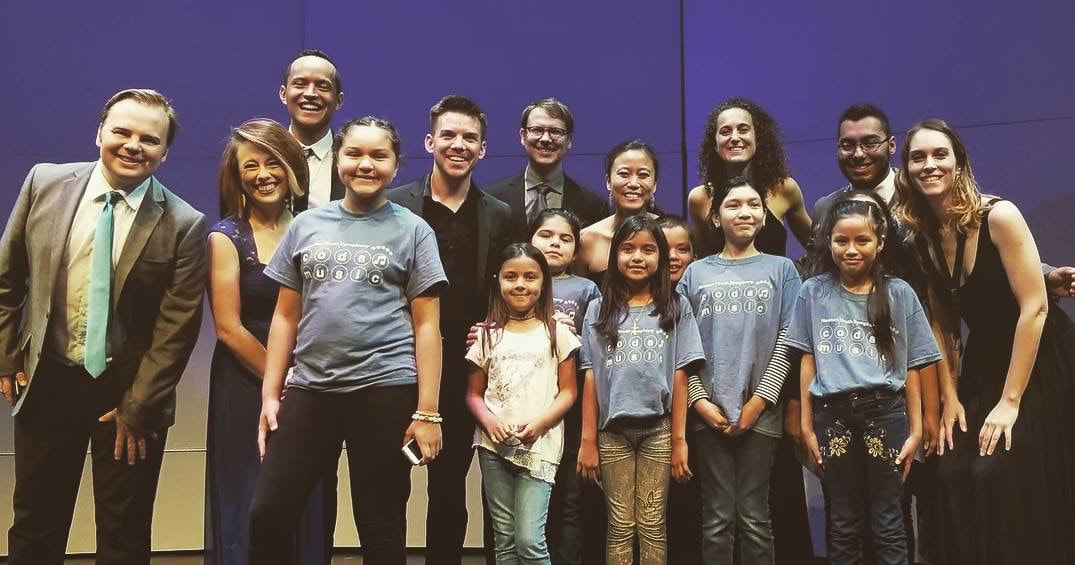