THANKS FOR JOINING US FOR THE ONLINE OFFSTAGE CHAMBER MUSIC FESTIVAL
presented by WindSync
​
April 21 - 25, 2020

Enjoy all videos from the festival below!

Our programming is made possible with generous support from the following organizations:
The City of Houston through the Houston Arts Alliance
Texas Commission on the Arts
National Endowment for the Arts
Huff Foundation
Boniuk Institute for Religious Tolerance at Rice University
Liberty Auto Sales, Inc. 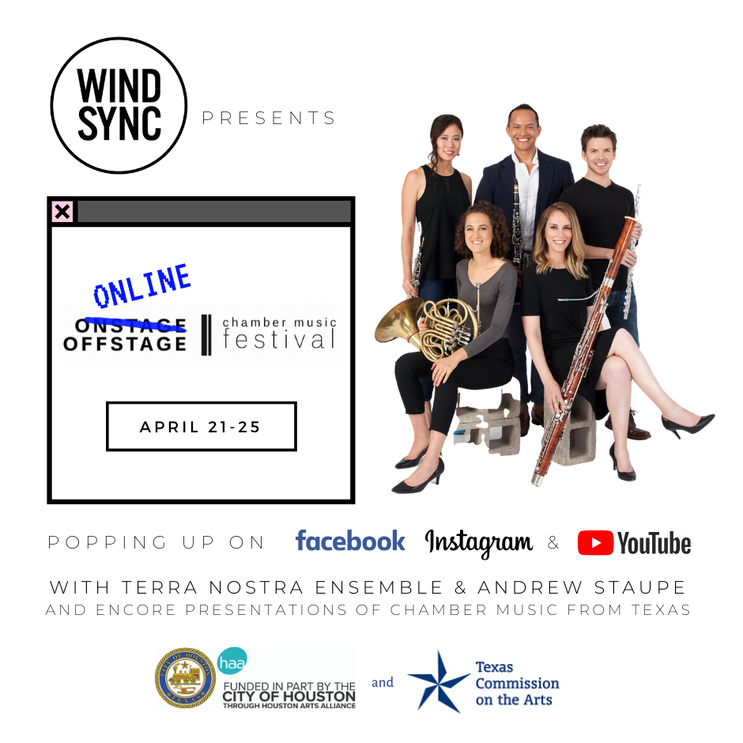 YOUR SUPPORT MAKES A DIFFERENCE!
GIVE TODAY

11 AM Central WindSync chat + Meet the Instrument Live: Julian and the clarinet

“Let us drink from the joyous cup!”
WindSync performs the Brindisi from Verdi's opera La Traviata in a multi-track recording created during the 2020 pandemic crisis. Verdi’s brindisi (drinking song) celebrates love and beauty, two things we could all get behind! Food and beverage establishments, we are celebrating many happy memories and cheering you on through this tough stretch! #onoff2020

​11 AM Central Meet the Instruments Live: Garrett and the flute &
​Emily and the oboe

11 AM Central Meet the Instruments Live: Anni and the horn &
​Kara and the bassoon

​3 PM Central Film + soundtrack premiere: A Trip to the Moon
Presented in partnership with the Houston Museum of Natural Science

Film: A Trip to the Moon (1902) by Georges Méliès
Soundtrack: Live performance of WindSync performing music by Jacques Offenbach

In this multi-media project we experience the bizarre and imaginative visual world of Georges Méliès, the whimsical and effervescent writing of Jacques Offenbach, and we discover the creative genius of WindSync bassoonist, Kara LaMoure. The idea to pair these two pieces of art stunned all of us with its thoughtful historical relevance and elegance of aesthetics. Kara not only created beautiful arrangements of Offenbach's music, but dreamed something truly special to show audiences. This project makes me incredibly proud to collaborate with Kara and to present concerts with WindSync.
- Anni Hochhalter, horn

Program Note by Kara LaMoure (the real one):
German-born French composer and impresario Jacques Offenbach made his name as the creator of nearly 100 operettas, generally scored to popular dance numbers like the waltz, can-can, polka, and galop. His A Trip to the Moon was loosely based on the novel From the Earth to the Moon by Jules Verne. The opera successfully premiered on October 26, 1875 and ran for 185 performances at the Théâtre de la Gaité in Paris. It was later staged in London and Vienna, and it enjoyed a wildly successful revival at the Théâtre du Châtelet a few years later.

A Trip to the Moon, the 1902 silent film produced in Paris by Georges Méliès, is largely credited as the first movie to have special effects. It shares a similar plot and the over-the-top style of Parisian theater with Offenbach's opera. Méliès himself stars as Professor Barbenfouillis, the Astronomy Club president who leads his intrepid brethren to the moon aboard a projectile fired from a cannon, encountering snowfall, a giant mushroom, and hostile insectoid aliens along the way. The ensemble cast is made up of dancers from the Théâtre du Châtelet ballet, the same company that had staged Offenbach's A Trip to the Moon revival 20 years earlier.

While the film was not created with a specific soundtrack, theaters generally offered their own to enhance the cartoonish action. WindSync created this live soundtrack for the film using music from the Offenbach opera, primarily from a scene in which the temperature on the moon drops to -50 degrees, and there is a grand ballet of snowflakes. Offenbach’s unlikely Ballet of the Snowflakes started a fad for snow ballets in the late 19th century, eventually inspiring Tchaikovsky to write his snow scene in The Nutcracker. After World War I, the Méliès film was thought lost to the French military, who had melted down film reels from the filmmaker's office to make boot heels during the war. Copies were finally rediscovered, and Méliès was recognized as one of the great pioneers in film, around 1930.

Performed live by WindSync on October 9, 2019 at the University of Texas Butler School of Music

The classic tale of Peter and the Wolf as told by a wind quintet!
​Fun for kids and adults alike!

Saturday 25 April
​
11 AM Central Meet the Instrument Live: Andrew Staupe and the piano​ 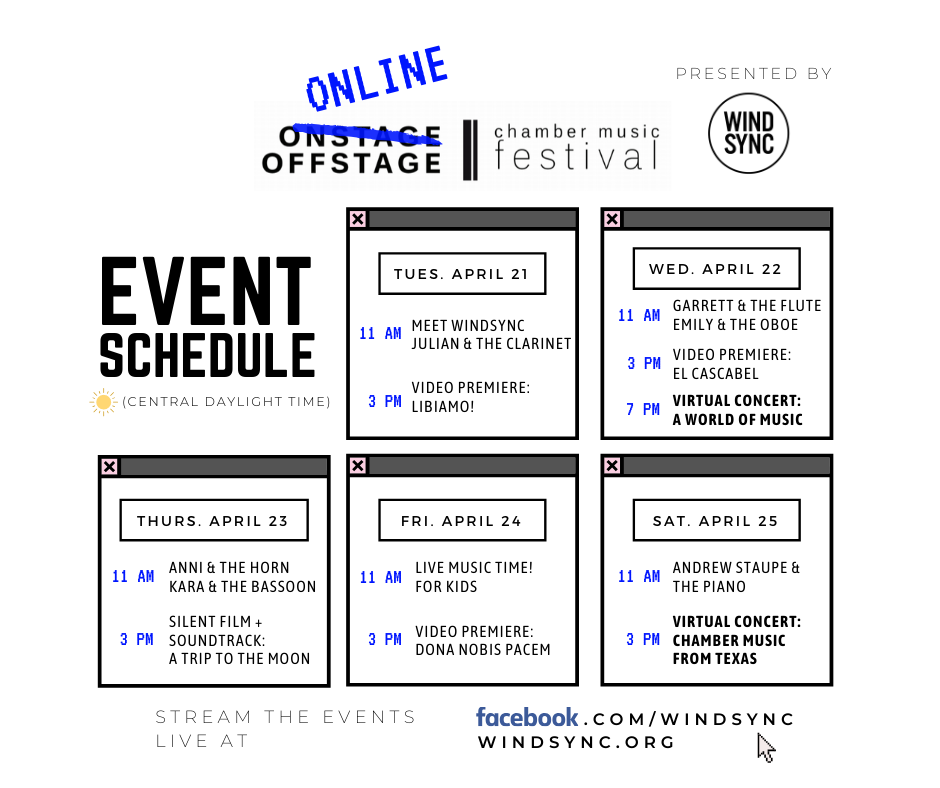 
Wednesday 22 April
11 AM Meet the Instruments Live: Garrett and the flute & Emily and the oboe

Thursday 23 April
11 AM Meet the Instruments Live: Anni and the horn & Kara and the bassoon

3 PM Film + soundtrack premiere: A Trip to the Moon
Presented in partnership with the Houston Museum of Natural Science

Saturday 25 April
11 AM Meet the Instrument Live: Andrew Staupe and the piano

While we wish we could present this festival in person, we are glad that technology offers us a new interactive medium to gather audiences and performers during an era of social distancing. What’s more, we are excited to introduce faraway family, friends, and fans to WindSync’s collaborators in our artistic home of Texas.

What is the Onstage Offstage Chamber Music Festival?
The Onstage Offstage Chamber Music Festival is WindSync’s way of connecting the neighborhoods and citizens of Houston through chamber music. Each year we feature performers of all stripes, from students to community musicians to the finest working professionals, and we present concerts in halls, businesses, and unlikely public spaces. The goal is to get everybody interacting in new ways and using chamber music as a vehicle toward a more creative and livable city.

Is the festival appropriate for all ages?
Yes!

What time zone are y’all in?
We will follow Houston’s time zone, Central Daylight Time. Friends around the world, don’t forget to translate to your own time!

How can I interact with you at the virtual events?
11 AM live events will include Q & A time. If you have a Facebook account, we encourage you to type directly into the comments of the Facebook Live video on our page.

What if I don’t have a social media platform, or what if I can’t attend the events as scheduled?
We will archive all festival event videos right here so that you can watch and share at any time!

Like other performing arts organizations, WindSync will be financially disadvantaged by the current crisis, however, we are listening and quickly adapting. Inspired by our mission and the needs of our world, we will continue to present innovative chamber music concerts and educational programs for children, families, and all members of the community. For now, we will participate and add to content that is safely online while planning our next public gatherings.  With your support we will be able to grow and create in the face of this adversity.